How to avoid misunderstandings 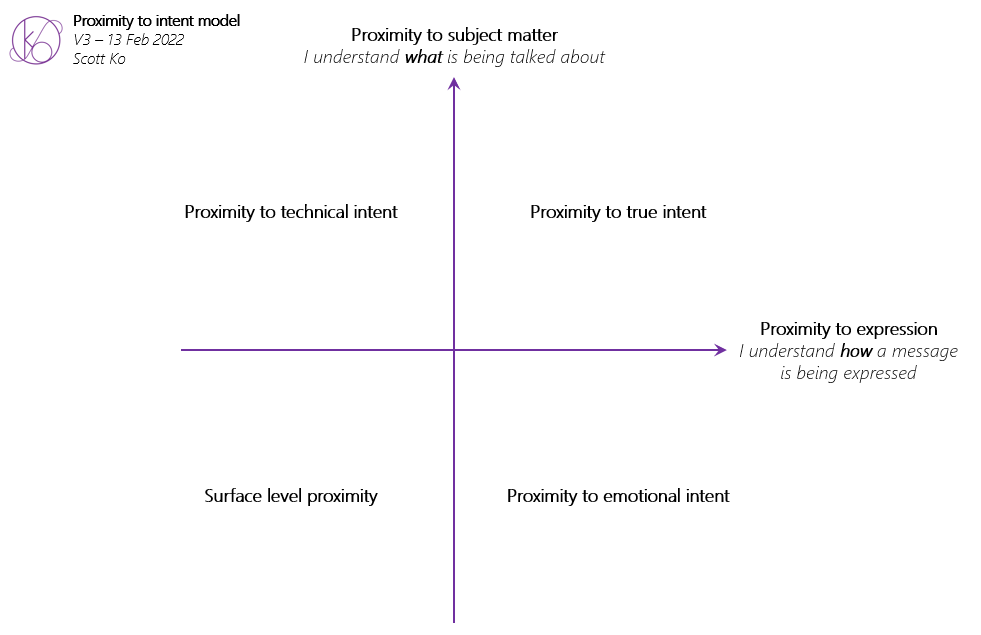 Let's begin with a quick exercise: Think of a friend you know deeply and personally. Now think of someone you know by name only, such as the CEO of your local banking institution. Now imagine these two people both said on LinkedIn: "Men and women are different. "What goes through your head? How would you react to the statement coming from your friend vs from the CEO?

I posed this thought exercise in one of my earlier Ko Lab newsletters, after finding out that my social enterprise ColourSpace was nominated as a finalist for an Ethical Enterprise Award. My dilemma at the time was whether or not I should announce this publicly because at that time, I was also the Acting CEO of Leadership Victoria, a highly reputable and well-regarded institution. I was stressed that in making a public announcement, people might perceive me as being flaky or not committed to the organisations I run, or perhaps leveraging my position for personal gain.

At the time, I wrote that:"...much of the discordance lies in my own head, that I should be true to myself and not be beholden to other people's expectations. However, I'm also keenly aware that I don't always get to control that narrative, especially when I'm also ostensibly the public face of two organisations."

In other words, whilst I can be true to my purpose and clear in my intentions, I can't disregard the fact that we live in an information ecosystem where it is easy for other people to misinterpret the things I say, sometimes with significant implications.

"That's not what I meant"

I'm going to go out on a limb and claim that this is a sentiment that literally everyone has expressed, whether in personal or professional situations, online and offline (probably more soon line but we'll get to that in a sec). What's more, I would argue that we've all universally experienced what it means to be misunderstood, as well as misunderstanding someone else.

The Oxford Dictionary defines 'misunderstanding' as a situation in which a comment, an instruction, etc. is not understood correctly but I think there's more nuance to it than that. Firstly, a misunderstanding arises in context of communication, in which an idea or an intent is being conveyed to someone else. Communication is comprised of two things: The message itself, and how the message is conveyed (which includes the context in which it's conveyed).

Thus, I believe a misunderstanding is a failure to understand either or both of these aspects.

A misunderstanding of the 'what' typically manifests in a lack of understanding of the concepts, specifics, or definition of what's being said. As a simple example, think of any conversation where you've had a 'lost in translation' moment between American vs British English (or any other languages). As a more complex example, recall any conversation where someone who is a technical expert in their field (i.e. doctors, engineers) gave you a set of complex instructions but you have no idea what they're talking about.

A misunderstanding of the 'how' typically manifests in the emotional and contextual zone, and can be influenced by everything from body language, grammatical style, cultural background, and the communication channel or medium. Think of the last 10 people you engaged with: Are they direct or indirect in the way they communicate? Serious or jovial? Big picture or detail-oriented? Emotional or serious? I believe this is why - in a highly digital landscape - there is a greater degree of emotional and contextual misunderstandings.

If we look at these quadrants through the lens of someone receiving a message, these are some of the characteristics to consider:

So far, I've presented these quadrants from the perspective of someone on the receiving end of communications. Thus what this model aims to demonstrate is that in order to minimise misunderstandings, there's a few things I can do:

So how can this tool be used to convey intent and avoid misunderstandings? I think there are two use cases for this.

The first use case is to use this to consider the way I communicate with others. Using this article as an example:

The second use case is to consider this from the perspective of the recipient. If I put myself in the shoes of someone who doesn't know me:

I hope the Proximity to Intent model has provided you with a new and different perspective to how we think about misunderstandings, how and why they occur, how to identify them, as well as things we can do to minimise the likelihood of misunderstandings.

If you'd like to receive additional updates and insights, I encourage you to sign up to my newsletter: the Ko Lab.